Ethan Gawronski was about 10 years old when he discovered Roblox. He dove into its games, mostly to socialize with other kids.

Now, at age 20, Gawronski has his own Roblox game that he works on full time with his girlfriend, Elle Deppe. The couple, who met on the app, earned more than $49,000 in the past month from their action game, Bad Business, by selling outfits and weapons players can use to make their characters look cooler and perform better.

“In private developer communities, there were people that were making stupid amounts of money and we thought we could do that,” said Deppe, who’s also 20, in a recent interview.

Bad Business is among the millions of user-created games on Roblox, the kids’ entertainment set to go public on Wednesday after being valued at $29.5 billion in January. The company has built one of the top-grossing apps for Apple and Google devices by turning youthful users into game creators without forcing them to learn complicated coding. The company rewards developers by sharing 30% of the revenue from virtual purchases.

Roblox said in the latest update to its prospectus that it paid developers $328.7 million last year, up almost 200% from 2019. That far outpaced the company’s sales growth of 82% last year, when it booked $923.9 million in total revenue.

Roblox is telling prospective shareholders to get comfortable with its hefty payouts. In its investor presentation last week, the company said it plans to shell out even more to creators to incentive higher-quality content and fund bigger teams of engineers, designers, artists and producers.

“What used to be a hobby has become a job for an individual person, and now is more and more becoming the foundation for large, incredibly creative studios who are emerging on our platform,” said CEO David Baszucki, who founded Roblox in 2004.

Gawronski dropped out of college last semester after taking two years of courses at Grand Valley State University, where he switched majors multiple times. Deppe finished her two-year associate’s degree in Portland, Oregon, and decided that was enough. They’ve been living together since last year in an apartment in Grand Rapids, Michigan.

The couple met in person for the first time in 2017 at a Roblox developer conference. They soon started working together and were invited into an accelerator program at Roblox two years later, at the company’s campus in San Mateo, California. That’s where they started building Bad Business.

“The goal of the accelerator program for us was to build something that was profitable enough to move in together,” said Gawronski, adding that monthly revenue is up about 30% since September. “It was a bit of a gamble but it worked out.”

Gawronski and Deppe have been updating the game every week or so with new weapons, maps and other features. Along the way, they’ve been able to add another full-time employee and eight contractors.

Roblox has been a huge beneficiary of the Covid-19 shutdowns, which forced kids out of the classroom and away from their friends. With no school to attend and birthday parties canceled, kids turned to Roblox, where they can socialize virtually, navigating theme parks, attending concerts and playing action games while also staying in touch using its popular text chat feature.

That unexpected and unprecedented growth has created some challenges around its developer community. The company has had to contend with an influx of spammers and scammers who are out to take advantage of some of the millions of kids who are ready and willing to spend their parents money on Robux.

In-game pop-ups lure users with the promise of free Robux if they fill out a survey, only to reroute them to other sites where there’s no Robux and even more spam. In some cases, Roblox developers unknowingly install a malicious plug-in from the game development studio, infecting their own game.

“Because of the popularity of our platform, we believe that we are an attractive target for these sorts of attacks,” Roblox said in its prospectus. The company said it’s investing to make sure outside parties can’t access user data and to prevent phishing, spamming and malware as much as possible.

Alexander Hicks, developer of the role-playing game Robloxian High School, said he noticed increased spam early in the pandemic when there was a surge in new users. But he said the company took action pretty quickly to restore order.

Hicks has a deep economic interest in Roblox keeping its site clean and prosperous. In 2020, his game studio, RedManta, doubled revenue on the site to $2 million.

In addition to Robloxian High School, RedManta is the developer of World // Zero, where kids team up to fight monsters. Hicks started the company in 2018 after dropping out of Carleton University in Canada and relocating to Silicon Valley. He was already making $50,000 a month from the high school game and was ready to reinvest his profits to build a business.

It hasn’t been all up and to the right. As an ambitious gamer with no real business experience, Hicks hired about 15 people, none over the age of 22. His company’s initial efforts to duplicate the success of Robloxian High School failed, and RedManta burned through cash so quickly that he had to lay off a lot of his early employees.

“I had hired to our capacity, so when the game started to do not as well I could see a future where we would not have money in the bank to keep funding it,” Hicks said. “That experience gave us the foresight for how to scale without taking too big of a risk.”

Hicks’ business boomed last year from both the pandemic-fueled growth of Roblox and the success of his second game, which has 1.2 million monthly active users, according to its website. He also closed the Silicon Valley office because of shelter-in-place orders and moved at least temporarily to Los Angeles, where he’s renting a house with friends.

RedManta now has 10 people, spread across the U.S. and Canada, adding features to both games while also working on the next prototype.

“The goal is to scale up so we have multiple games and multiple teams to stay diversified so if one game sees its popularity drop, we’re safe with other ones,” he said.

Roblox may soon give developers another way to diversify: In-game ads.

Thus far, almost all of Roblox’s revenue has come from virtual items. More recently the company rolled out a premium subscription service so users could get a certain amount of Robux every month.

But Roblox has started dabbling with branded content, allowing companies like Warner Bros., Netflix and Marvel to market their products through virtual experiences. The pop band Why Don’t We held an exclusive launch party on Roblox over the weekend for their new album.

Sam Drozdov, a former product designer at Facebook, sees a potentially bigger untapped opportunity for advertising. In January, he launched Bloxbiz to allow game developers to show ads within their games, using 3D billboards and posters.

Drozdov said that some developers have done this on their own, putting up static ads in their games. But there hasn’t been an ad network to connect businesses with hundreds or thousands of Roblox titles in an automated way, even though in-game advertising is a rapidly growing business across mobile, console and computer games.

Bloxbiz is still testing out the technology and hasn’t started making money yet. One key challenge is allowing brands to reach a lot of users while targeting the types of games they want to reach and avoiding those they don’t. For example, they may want to stay out of violent games or focus more on those involving food.

Drozdov said Bloxbiz will share revenue with developers and is mostly going after those who have popular games but aren’t making enough money through Robux to make it their full-time job.

“Roblox wants them to make money, but a lot of them are still not at a point where it’s their livelihood,” said Drozdov. “We were interested in how we can accelerate that and create a new monetization option for Roblox game developers.” 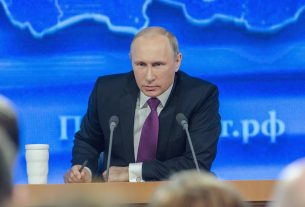 Beginning Of The End Of Putin? Opposition Leader Says ‘He Is Falling Apart And He Is Clearly Aware Of It’