China’s online retailer JD.com has listed OnePlus Watch for pre-orders in the country. To book the smartwatch, customers will have to pay a deposit amount of CNY 50 (roughly Rs. 600), the listing shows. As a bonus, customers pre-ordering OnePlus Watch will get a CNY 100 (roughly Rs. 1,100) discount on its final purchase. The exact pricing details about the smartwatch are yet to be announced.

The listing on the JD.com site shows that OnePlus Watch will come with Bluetooth and GPS connectivity. Further specifications are yet to be revealed.

Unbox Therapy tweeted a render suggesting the design of OnePlus Watch. It appears to have a circular design and come with a patterned wrist strap. Further, there are two physical buttons on the right — one of which features the OnePlus branding.

The overall design of OnePlus Watch appearing on the leaked render looks quite similar to Oppo Watch RX. It is important to point out that both OnePlus and Oppo are owned by the same parent company BBK Electronics, and they were recently said to have merged their hardware R&D operations.

If we look at a previous report, OnePlus Watch will come in a 46mm dial size and have Black and Silver colour options. The smartwatch will also include heart rate and SpO2 sensors as well as include the IP68-certified build. It could support fitness-tracking features and may include a dedicated swimming mode. OnePlus Watch is also rumoured to have 4GB of onboard storage and Warp Charge technology to deliver a week-long power in 20 minutes of charging time.

OnePlus Watch was originally expected to run on Google’s Wear OS. However, OnePlus Co-Founder and CEO Pete Lau recently revealed that it will come with a custom operating system to provide a better experience over Wear OS.

OnePlus is hosting its launch event on March 23 where OnePlus Watch will be unveiled, alongside OnePlus 9, OnePlus 9 Pro, and OnePlus 9R smartphones.

Is Mi 10i a OnePlus Nord killer? We discussed this on Orbital, our weekly technology podcast, which you can subscribe to via Apple Podcasts, Google Podcasts, or RSS, download the episode, or just hit the play button below. 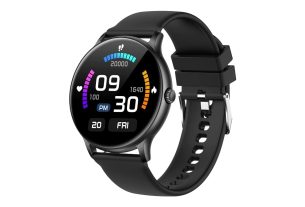 Are Affordable Smartwatches Worth It? A Deep Dive Into India’s Smartwatch Market