Some two months after announcing a fresh $115 million in funding at a lofty $1.7 billion valuation, developer platform Harness today unveiled the beginnings of what could be the start of a fruitful friendship with the open source community.

The San Francisco-based company offers a continuous integration and delivery platform (CI/CD) for engineering and developer operations (DevOps) teams, leaning on machine learning (ML) and AI techniques to monitor and automate software deployments, enable rollbacks, and more. The “CI” facet of its platform, however, is a relatively new addition to the mix, born from its Drone.io acquisition back in August.

Founded in 2012, Drone.io is an open source, self-serve, container-native continuous integration platform. It’s leveraged by many big-name brands including Cisco, eBay, VMware, and Capital One, and over the past decade Drone.io has grown a commercial business off the back of the OSS project, selling more advanced features such as secrets management and auto-scaling.

Thus, any developer-focused company looking to add an oven-baked “CI” tool to their “CD” stack were always going to be enticed by Drone.io’s proposition.

“The acquisition of Drone really came down to the timing being right and wanting to partner with a company like Harness to build the future,” Harness CEO and cofounder Jyoti Bansal told VentureBeat. “Drone laid a lot of the groundwork, but it was a matter of taking CI to the next level.”

Fast-forward seven months since the acquisition, and Harness today announced a number of notable updates to bolster its newfound open source ethos, marking its first major contribution to the open source software community. Bansal said that Harness plans to support the Drone open source community “as though they are an enterprise customer,” while keeping the product free and fully open source. “Since the acquisition, Harness has doubled Drone’s engineering investment,” Bansal added.

While Harness has committed to leaving the Drone brand, website, and community “untouched,” harness will ultimately offer three CI editions directly through the Harness website: Community (Drone open source), Essentials (Drone paid), and an enterprise incarnation which will be “available shortly.” Today’s news sees Harness add new capabilities to the Community and Essentials editions, which were formerly part of the Drone project. This includes a refreshed user interface that is more consistent with Harness’s broader platform, and which allows developers to “visualize and watch their CI pipelines as they execute,” Harness CEO and cofounder Jyoti Bansal told VentureBeat. This helps them understand which pipeline steps are currently executing and in what order, and is generally an easier way to track complex pipelines compared to reviewing log files. 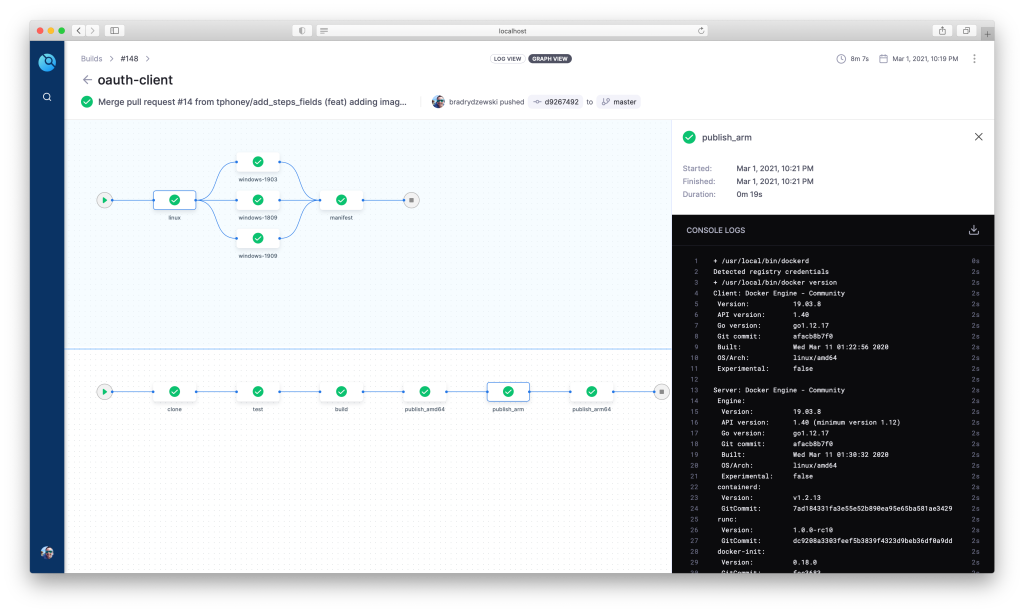 Above: Harness: A refreshed CI interface built on Drone

Other new features include a new CI debugger and “enhanced governance and security” tools which make it easier for managers to control access permissions for their developers users, through a straight forward user interface.

This is really just the beginning of Harness’s open source adventure, according to Bansal, who said there is much more to come on that front — though he was quick to note that the company has embraced open source technologies since its inception through its support and integration of major projects involved in the software delivery process, including Docker, Kubernetes, and Jenkins.

“This acquisition was the first step in bringing open source to more areas of our platform — we already had several other internal projects in the works at the time that will be open sourced, and have been doing an enormous amount of community work with the CD Foundation (an open source community built around software delivery),” Bansal explained. “You’ll see more open source announcements from Harness later this year.”

But why, exactly, has Harness decided to dive head-first into open source now? And could it not just have developed its own CI tooling internally?

“From selling CD, we learned a lot about the CI market, and the shortcomings of certain projects and tools,” Bansal explained. “We felt like the choice for cloud and container-native CI tools was small, and we had big ideas on how to innovate and improve the developer CI experience. We bought Drone because we are all-in, on both the product and the community. We want to provide everyone – company, team, and individual developer – with the best CI/CD platform on the market, and that requires a complete commitment to innovation and improvement.”

Ultimately, all this is for the same reason as any company anywhere decides to embrace open source: with more than 50,000 active community users, including from major enterprises, Harness is aligning itself with a large army of Drone developers who can collectively ship code much quicker than any internal team can. Many businesses benefit from that combined effort, while Harness can also capitalize on the commercial, market-ready CI product.

Looking across the broader open source sphere, the pandemic has played more than a bit part in driving open source adoption in the enterprise, with Red Hat recently noting in its annual State of Enterprise Open Source report that 90% of enterprises use commercial open source in their organizations. Elsewhere, the tech titans of the world continue to double down on their open source investments, with Microsoft recently reporting that it had learned a lot from its increased engagement with the open source world over the past year, adding that “open source is also now the accepted model for cross-company collaboration.”

With that in mind, the next major updates from Harness will be a new CI enterprise edition which builds on some of the key concepts behind Drone, and “takes things to another level for the developer,” according to Bansal. As the company moves further into the open source space, we can also expect to see more parts of the original Harness product made open source over time, including core elements of the core CD platform as well as newer projects it’s working on internally.

“We’re all-in on open source, and we want our contribution to be significant so it moves the needle for our industry,” Bansal said.

Transform 2021 puts the spotlight on women in AI