Consumer spending in apps has hit a record $32 billion (roughly Rs. 2,34,400 crores) in the first quarter of 2021, according to a report. While the coronavirus pandemic has adversely impacted many businesses across the globe, it has marked a positive effect on the app market worldwide as people started downloading more apps on their devices and paying more for in-app purchases since the beginning of 2020. Both Apple App Store and Google Play have seen an increase in app downloads and in-app purchases.

The firm said that smartphone users spent around $9 billion (roughly Rs. 65,900 crores) more on apps and games in the first quarter over what they did in the same quarter of last year.

In terms of growth on the basis of platforms, App Annie noted in its report that the growth in the first quarter was shared equally by both Android and iOS. “Consumer spend grew 40 percent year-over-year to $21 billion (roughly Rs. 1,53,800 crores) on iOS, and by the same percentage year-over-year to around $11 billion (roughly Rs. 80,600 crores) on Google Play,” it said.

Similar to the growth in consumer spend, total downloads also grew significantly. App Annie said that downloads on App Store and Google Play combined rose by 10 percent to 31 billion in the first quarter.

On App Store, Games, Finance, and Social Networking were the top categories driving the most downloads. The most prominent was, however, Health and Fitness as downloads of apps in that category rose 25 percent quarter-over-quarter. It makes sense as a large number of smartphone users continued to stay at their homes and engaged in fitness activities indoors due to the COVID-19 outbreak.

The top apps by downloads, consumer spend, and monthly active users (MAU) across the App Store and Google Play were TikTok, YouTube, and Facebook in the first quarter. App Annie, however, noted that messaging app Signal emerged as the fastest-growing app by downloads and MAUs, whereas Telegram was at number three in downloads and number two in MAUs. This could be due to the recent criticism of WhatsApp over its new privacy policy. 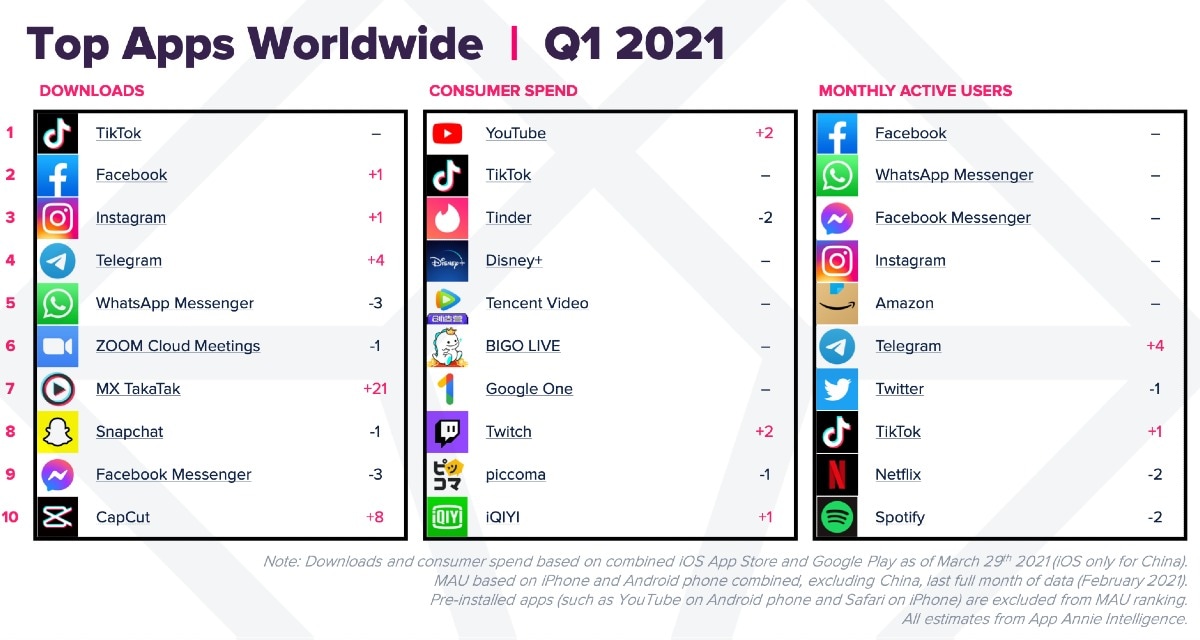 Indian app MX Takatak, a local alternative to TikTok, was also seen as the fastest growing app by downloads in the quarter. But nonetheless, TikTok itself led the top downloads chart, followed by Facebook and Instagram.

TikTok was also the second leading app in terms of consumer spend, though YouTube dominated that front and Tinder came third. On the part of MAUs, Facebook led the market, followed by WhatsApp and Facebook Messenger.

App Annie in January reported that mobile app downloads reached a milestone of 218 billion in 2020. However, the latest results suggest that we may see even further growth this year.

App Annie said that a billion games were downloaded every week in the first quarter — showing an increase of 15 percent from 2020 and 35 percent from the weekly average recorded in the same quarter of 2019. Google Play downloads grew 20 percent year-over-year to 11 billion.

Supersonic Studio’s casual survival title Join Clash 3D became the most downloaded game of the quarter. It was followed by Among Us and DOP 2: Delete One Part.

On the consumer spend front, Roblox led the market, followed by Genshin Impact, Coin Master, and Pokemon Go. Titles including Among Us, PUBG Mobile, and Candy Crush Saga, however, led the list of games receiving most MAUs in the quarter. 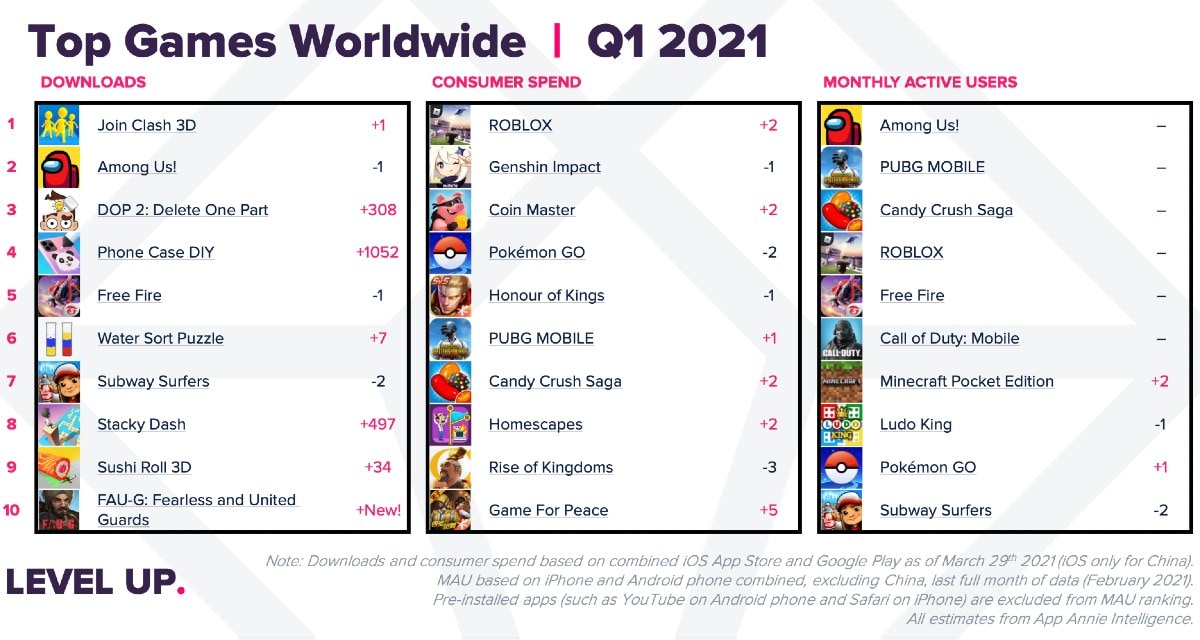 “Mobile gaming strategy — product development, partnerships, international expansion, user acquisition, marketing, monetisation and retention — is more important than ever before, and gaming publishers need to have a clear view of the market and the road ahead,” the firm said.

Does WhatsApp’s new privacy policy spell the end for your privacy? We discussed this on Orbital, the Gadgets 360 podcast. Orbital is available on Apple Podcasts, Google Podcasts, Spotify, and wherever you get your podcasts.

Samsung Galaxy A13 4G Specifications Tipped, Production Said to Have Started in India