iOS 14 is now reportedly running on over 90 percent of all iPhone models as per the latest analysis by a business analytics service company. The next version of the mobile operating system, iOS 15, is expected in the coming months, typically announced around Apple’s annual WWDC event. Back in December of last year, 81 percent of all iPhone models released in the previous four years were already running iOS 14 and that number increased to 86 percent by late February. Apple introduced iOS 14 to the public in September last year and the adoption has been quite effective over the past nearly seven months.

According to the data shared by business analytics service company Mixpanel, iOS 14 is being used by 90.44 percent of iPhone users. Having launched for the public in September 2020, it’s impressive to see such an adoption in less than seven months. The data also shows that 5.07 percent of users are on iOS 13 while 4.49 percent of users are still on older operating systems. These percentages have been measured till April 5. 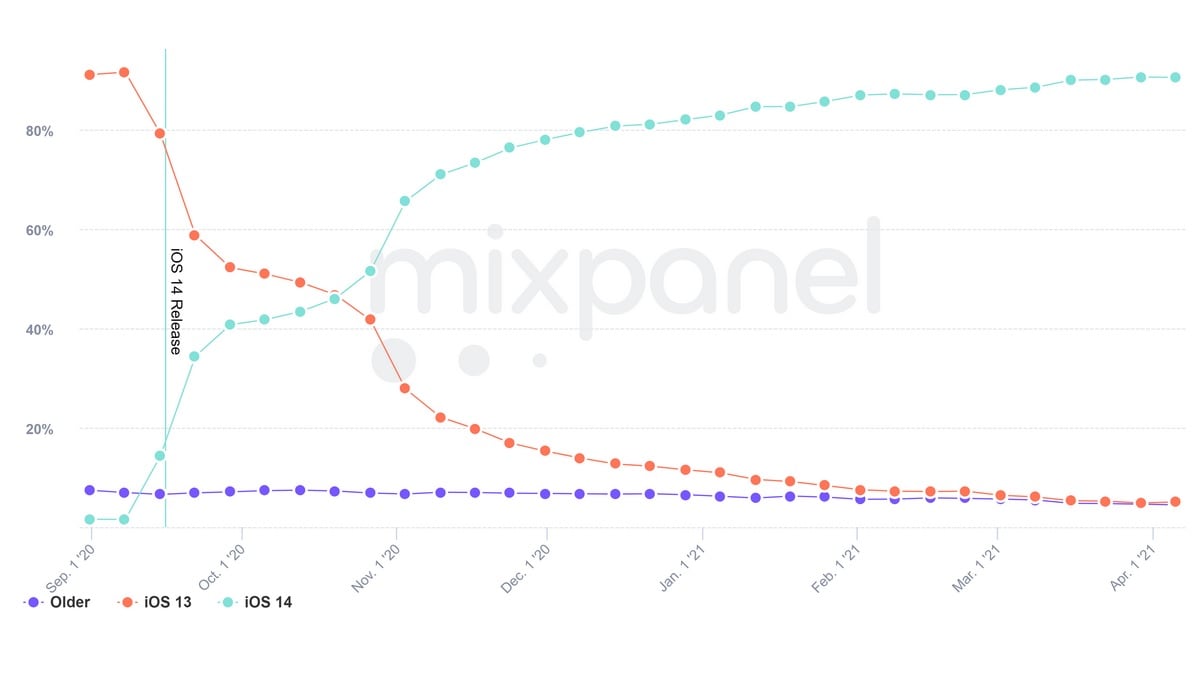 iOS 14 has been reaching more users and the latest data isn’t surprising when we look at growth numbers shared by Apple in December last year. The Apple Developer website stated at the time that 81 percent of all iPhone models and 75 percent of all iPad models released in the previous four years were running iOS 14 and iPadOS respectively. The website shows iOS 14 adoption has increased to 86 percent and iPadOS adoption has increased to 84 percent as measured on February 24 this year. So, while Apple has not shared latest data for iOS adoption, it would be fair to see 90 percent adoption with around two more months under iOS 14’s belt.

The latest beta firmware, iOS 14.5 is currently being tested and at launch, it met with some misconceptions about a certain feature that users believed would allow them to select a default music service for Siri requests, other than Apple Music. But, Apple issued a clarification that this wasn’t the case that the new feature is Siri intelligence-based, meaning it can improve over time and even change as it learns to better understand its users’ listening habits.