For what it’s worth, The Falcon and the Winter Soldier episode 5 did have a few big revelations though. Sharon Carter (Emily VanCamp) more or less confirmed herself as Power Broker, something that Marvel fans had been guessing ever since she returned to the MCU back in episode 3. Rich-guy Zemo (Daniel Brühl) was handed over to the Wakanda’s Dora Milaje. Super-soldier Isaiah Bradley (Carl Lumbly) told us his backstory and what led to his imprisonment and torture. And then, most unexpected of all, there was that Julia Louis-Dreyfus cameo as Valentina Allegra de Fontaine. Has Marvel found its next major villain?

The Falcon and the Winter Soldier episode 5 — titled “Truth”, directed by Kari Skogland, and written by Dalan Musson — opens with Walker fleeing the crime scene. He gathers himself in an abandoned factory, reflecting on the death of his best friend and right-hand man Lemar Hoskins’ (Clé Bennett). Walker is disappointed in himself, it seems, but he then pulls himself back into battle mode as he utters Lemar’s words from episode 2: “Time to go to work.” Just then, Sam and Bucky show up. They try to go soft on him, noting that it happened in the heat of battle, and that they just want to make sure nobody else gets hurt. Sam then adds: “You gotta give me the shield, man.” Walker’s ears perk up and he realises what they are actually here for.

As you can expect, the trio launch into a fight, with Walker making full use of his new Super Soldier Serum abilities. He gains the upper hand on both initially, knocking Bucky into a pillar and pinning Sam to the ground as he breaks his Falcon wings. “I am Captain America,” he shouts in anger, giving us another look at his dark side that we first saw in The Falcon and the Winter Soldier episode 4. But Sam and Bucky eventually find a way to overpower him and wrest the shield from Walker’s control. Bucky picks up the shield but then throws it next to Sam as he leaves. He’s making a statement initially, a coda to his series-long argument about how Sam shouldn’t have given up the shield in the first place.

They later regroup back in the city centre where the US government has taken control of the situation. Bucky leaves (again) without a word, and Sam believes he’s going to take care of Zemo. Sam’s military friend Joaquin Torres (Danny Ramirez) is back who wonders what happened to the wings. Sam doesn’t say, but he leaves the wings behind as departs with the shield. The Falcon and the Winter Soldier episode 5 takes us to Washington DC where the US military is essentially court martialling Walker. Or the next best thing to it. The guy who appointed him as Captain America tells him he’s being stripped of his rank and that he will never be a part of the military again. Walker is still angry and launches into a tirade, pointing out that it was the government who made him into the soldier he is and who asked him to do the things he was doing. But the United States has no interest in making nice to him. He’s getting an “other than honourable discharge”, which means he won’t get any of the retirement benefits either.

Outside, Walker’s wife Olivia (Gabrielle Byndloss) tries to placate him but he’s obviously not very interested. Just then, Louis-Dreyfus shows up in purple heels, a dark purple outfit, and blueish hair highlights. She introduces herself as Contess Valentina Allegra de Fontaine — in the Marvel comics, she was once Madame Hydra but it remains to be seen what her role in the MCU will be. Valentina says she knows everything, that Walker took the serum (“the second best thing you did”) and that he doesn’t have the shield. The best thing you’ll do in your life is pick up the phone when I call you, she says. She will be in touch, Valentina says as she departs, leaving behind a card that’s black on one side and white on other. There’s nothing written on it though.

The Falcon and the Winter Soldier episode 5 jumps to Flag Smashers leader Karli Morgenthau (Erin Kellyman) in Latvia. The place for those refugee kids from episode 4 has been shut by the GRC for abetting international fugitives. Karli is naturally angry over the situation and she says the GRC won’t stop what it’s doing “unless we make them stop.”

Cut to Zemo at the memorial in Sokovia. Bucky arrives with a gun, points out at Zemo’s head, and pulls the trigger. But the cartridge is empty. As he drops the bullets with his vibranium left hand, Bucky reveals that the Dora Milaje are with him. He hands Zemo over to the Wakandan security forces, fulfilling the promise he made in The Falcon and the Winter Soldier episode 4. So much for Zemo’s smart escape, I really thought something more would come out of that. Ayo (Florence Kasumba) says that Zemo will be put in the Raft, that special prison in the middle of an ocean that Tony Stark/ Iron Man first used to house some Avengers in Captain America: Civil War. But right before Ayo leaves, Bucky says he has another favour to ask of her.

The Falcon and the Winter Soldier episode 5 moves to Baltimore, and Sam (with the shield) is naturally there to see Isaiah. Sam wants to know what really happened with Isaiah. After he gets past his bitterness, Isaiah reveals that different serums were injected in a bunch of his soldier friends, including him. This is at a time when Steve Rogers/Captain America was still in ice and the US military was trying to recreate the Super Soldier Serum. Some started dying, others got captured on missions. The government wanted to bomb the prisoner of war camps to hide the “evidence”, but Isaiah rescued and saved them. For his actions, he was imprisoned, tortured, and experimented upon for 30 years. He lost his family while he was inside, and he’s only alive thanks to a nurse who had him declared dead.

“They will never let a Black man be Captain America,” Isaiah tells Sam as he leaves. “And even if they did, no self-respecting Black man would want to be.” Sam goes home to his sister Sarah Wilson (Adepero Oduye) in Louisiana. With the US government taking over the Latvian situation and Karli in the wind, he doesn’t have a lot to do right now. Sam promises Sarah that he will get the boat fixed and he calls in favours from everyone in town his parents helped. Meanwhile, Bucky arrives with a package from Wakandans. But before Sam opens it, they get busy fixing the boat.

The Falcon and the Winter Soldier episode 5 cuts to Walker who is visiting Lemar’s grieving family (Antonio D. Charity, Tara Warren, and Shenai Hylton). He lies to them about who killed their son, and Lemar’s crying mother is satisfied that his son at least got justice. Walker knows he has unfinished business, and he walks out after apologising.

Next up, there’s another small inclusion for Sharon — still in Madripoor — who is talking to Batroc over the phone, The Falcon and the Winter Soldier episode 5 subtitles reveal. You would still be in an Algerian prison, Sharon says, possibly referencing the opening fight from episode 1. Sharon talking to Batroc is more or less a confirmation that she’s “hustling” for real — and that she’s the Power Broker we’ve been hearing about the past few episodes. I’d be surprised if it turns out to be someone else now.

The Falcon and the Winter Soldier episode 5 flips back to Louisiana next morning, with Sam and Bucky still working on the boat. But they aren’t doing the right job, it seems, as Sarah reprimands them for focusing on the wrong thing when she walks in. Sam and Bucky take a hike back to the Wilsons’ place, where they practice with the shield as they have a heart to heart. Bucky says he felt betrayed when Sam gave up the shield because it’s the closest thing he has left to a family. But they — Steve and he — didn’t know what it meant for a Black man to have the shield. He’s sorry for how he acted and what he said. In return, Sam gives Bucky advice, pointing out to him that his therapy is not working because he’s going about it the wrong way.

“You weren’t amending, you were avenging,” Sam concludes and tells him to help people find closure. I can guess what’s coming, he’s going to tell Yori (Ken Takemoto) — the father of the eyewitness he killed during his Winter Soldier days — the truth. With that, Bucky goes on his way.

Sam has another deep conversation with Sarah who finally agrees that they can’t sell the boat. Sam notes that he’s realised he can’t win every fight, but this is one they can’t afford to lose — it’s about their history and they have to preserve that. Sarah has some advice of her own: he can’t let Isaiah get in his head and that he must do the work. Sam points out that he’d feel the same way if he was in Isaiah’s shoes. But what’s the point if I don’t stand up and keep fighting, he adds. That launches The Falcon and the Winter Soldier episode 5 into a training montage — more shield time and very acrobatic this time — as Sam finally embraces his new Captain America identity. 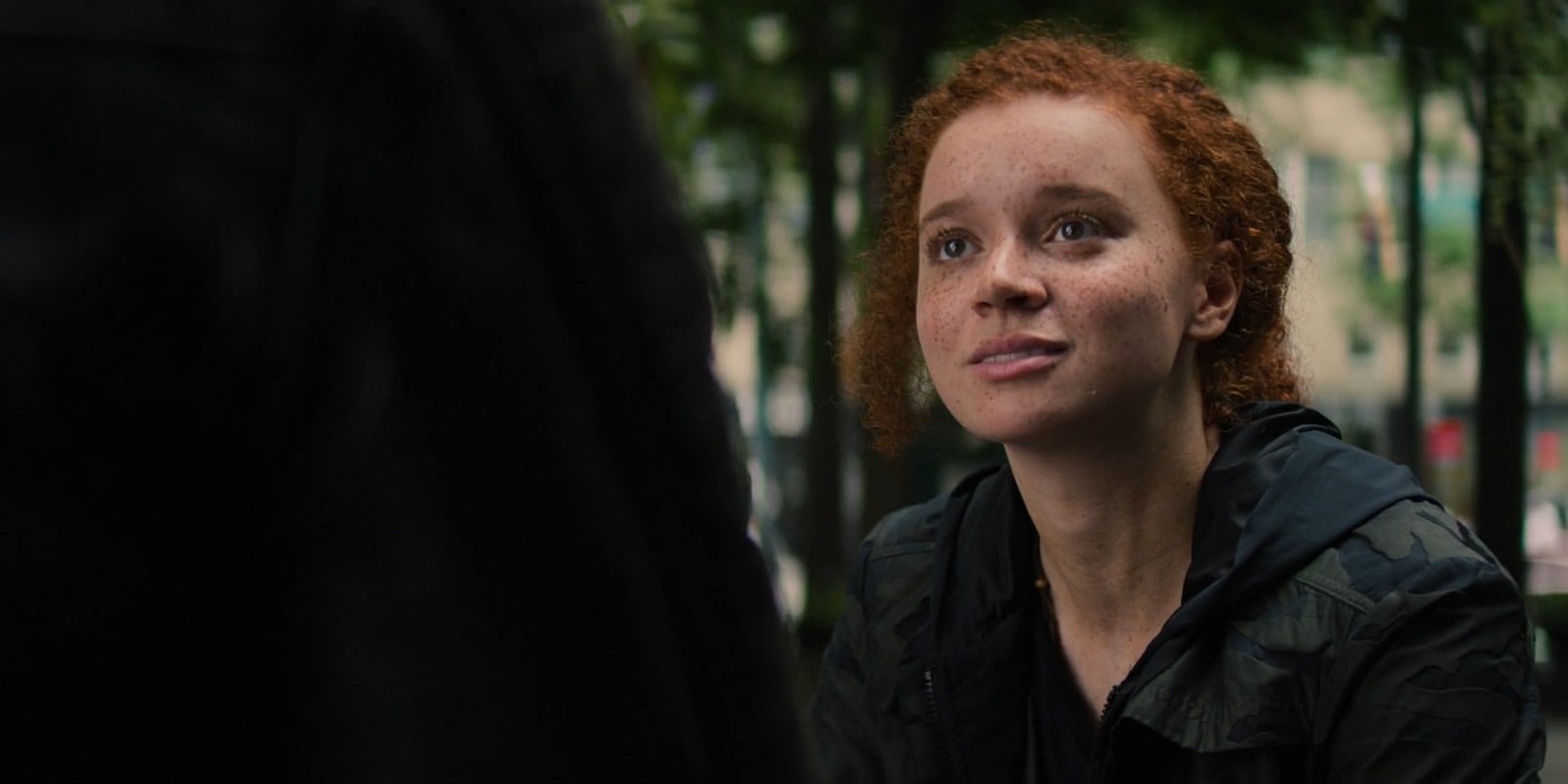 Erin Kellyman as Karli in The Falcon and the Winter Soldier episode 5
Photo Credit: Disney/Marvel Studios

Elsewhere, Karli’s plan is moving into place. She meets up with Batroc (Georges St-Pierre) — the guy who was on the phone with Sharon — who hands over some swanky new weapon. Karli’s right-hand man is worried about working with criminals, but she says they are embracing what they are being already called. She then activates an app that sends out a notification to everyone around them in the park. Flag Smashers definitely have a lot of support. The Falcon and the Winter Soldier episode 5 then reveals that Karli has arrived in New York, as they are planning to attack the GRC which is voting on a “Patch Act” that would move millions to refugees back to their countries of origin. As the GRC council convenes, Flag Smashers infiltrate and lock the place down with the new weapon.

Back in Louisiana, Sam gets a call from his army buddy Torres who tells him that the Flag Smashers signal they have been tracking has popped up in New York. I guess The Falcon and the Winter Soldier episode 6 is going to be set in New York then. As he puts the phone down, Sam finally opens the Wakanda briefcase and smiles. It’s a new suit, isn’t it?

The Falcon and the Winter Soldier episode 5 is now streaming on Disney+ and Disney+ Hotstar. New episodes release every Friday around 12:30pm IST/ 12am PT.