For a long time, Sony and Bose competed to produce the best premium wireless over-ear headphones with active noise cancellation. With the excellent WH-1000XM4 headphones, Sony finally took the lead in the race. The Sony WH-1000XM4 offers a wholesome all-round experience when it comes to design, sound quality, active noise cancellation, and battery life, and is priced at Rs. 29,990 in India. Many will agree that this is one of the best pairs of wireless headphones you can buy right now.

Sony’s undisputed dominance in the space didn’t last very long though; a challenger emerged in the form of the Apple AirPods Max in late 2020. Priced at Rs. 59,900, the AirPods Max costs twice as much here. However, it delivers a more premium experience in many ways, and offers connectivity and ease-of-use benefits for iPhone, iPad, and Mac users.

Although there is a considerable price difference between the Apple AirPods Max (Review) and the Sony WH-1000XM4 (Review), they are currently each other’s biggest competition, in my opinion. Which one is worth buying, then? Find out in this detailed comparison between these two premium wireless active noise cancelling headphones.

Buyers using Android smartphones or simply unable to fathom such a price for wireless headphones would be better off considering the Sony WH-1000XM4 for Rs. 29,990. Both headsets are available across e-commerce portals, the respective companies’ online stores, and offline retailers across the country. While the AirPods Max is available in five colour options including some rather bright tones, the Sony WH-1000XM4 is only available in black and silver.

As with all its products, Apple has paid close attention to the design and build quality of the AirPods Max, and this has resulted in an incredibly beautiful, luxurious, and comfortable pair of headphones. The liberal use of anodised aluminium for the ear cups, the soft foam ear pads, stainless steel frame, and knit-mesh headband make the headphones look and feel beautiful, and the bright colours give it some character as well.

The controls are excellent and very easy to get used to, and the AirPods Max also uses its custom Apple-made H1 chip to enable quick, stable, and seamless connectivity with Apple source devices. If you have an iPhone, Mac computer, and iPad, the AirPods Max almost magically switches between each of them, sensing exactly which one’s sounds you need to hear. You can also use it as a wired headset with a Lightning-to-3.5mm audio cable, though this is an expensive optional purchase.

There are some shortcomings with the AirPods Max, particularly the rather strange-looking Smart Case, the lack of a power button, and Apple’s continued use of the proprietary Lightning charging port. The headset is primarily meant to be used with Apple source devices, and although it works just fine over Bluetooth with most other smartphones, tablets, and computers, many of its benefits and customisation options are only available when connected to an Apple device.

Sony, on the other hand, has gone with a safe and familiar look for the WH-1000XM4; it looks very similar to its predecessors in the 1000X range. That said, it remains comfortable and sophisticated, with controls that are easy to get used to and work well. Charging is through a USB Type-C port, and you can use it as a wired headset by connecting the included 3.5mm stereo cable. 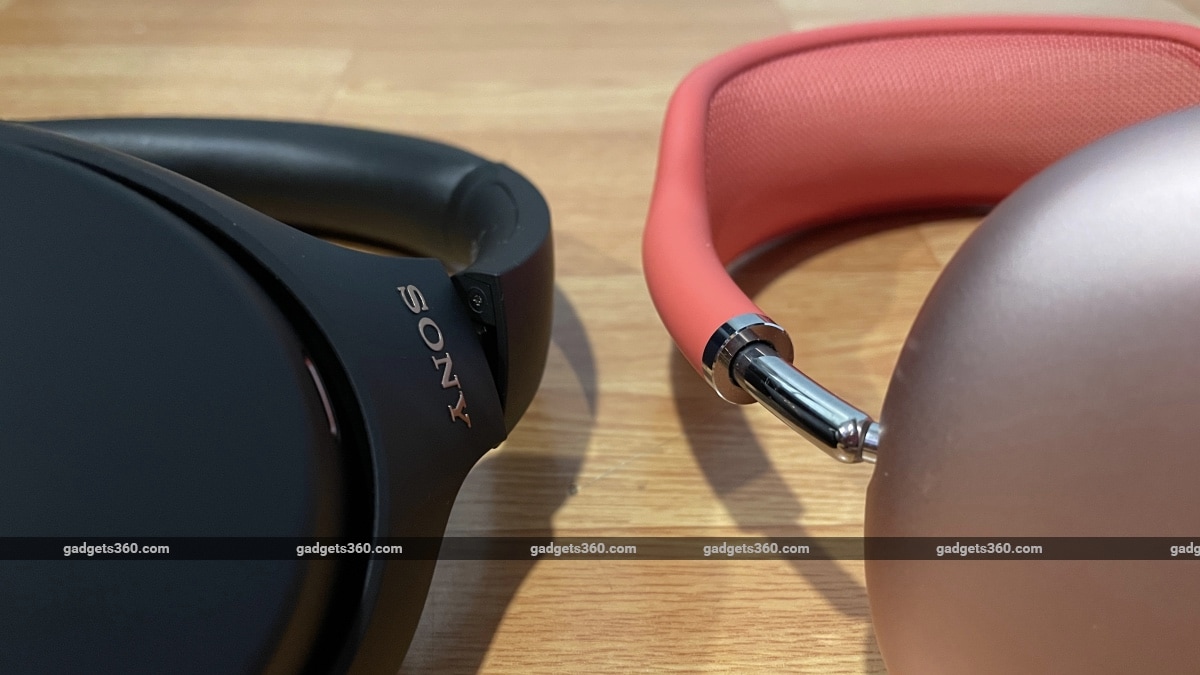 Where the Sony WH-1000XM4 really beats the AirPods Max is in terms of Bluetooth codec support. While the latter supports only the SBC and AAC Bluetooth codecs, the Sony headset goes a step further with support for the LDAC high-resolution Bluetooth codec in addition. This particularly suits use with Android devices, as it allows for more data to be transmitted, and therefore makes for a more detailed and enjoyable sound. There is, however, no support for the Qualcomm aptX Bluetooth codec.

The Apple AirPods Max are clearly meant to be used with Apple source devices, but the Sony WH-1000XM4 doesn’t discriminate in this department. It works equally well with both Android and iOS devices, and also supports multipoint connectivity to maintain a simultaneous connection with two Bluetooth sources.

Many of the customisations and tweaks you can get with modern wireless headphones require the use of a companion app or similar implementation, which is the case with both the Apple AirPods Max and Sony WH-1000XM4. While the Sony headphones have a dedicated app for iOS and Android, controls for various aspects of the Apple headphones are integrated into iOS and macOS.

Sony’s app offers a lot more customisation options and the ability to set the headphones up the way you want, including the equaliser settings, the speak-to-chat feature, adjustable levels for ANC and hear-through, and more. Most options are available on both iOS and Android, making for a largely consistent usage experience regardless of the source device in use.

While you can pair and use the AirPods Max with any Bluetooth device, it’s only possible to modify settings and customise controls when the headphones are paired with an iOS device such as an iPhone or iPad. These settings can be accessed through the Bluetooth menu, and there are only basic toggles and orientation options for the controls, rather than detailed settings or the ability to tweak the equaliser or ANC. On an Android device, you won’t see any of these options, and will have to use the default or last used controls and settings on the headset. 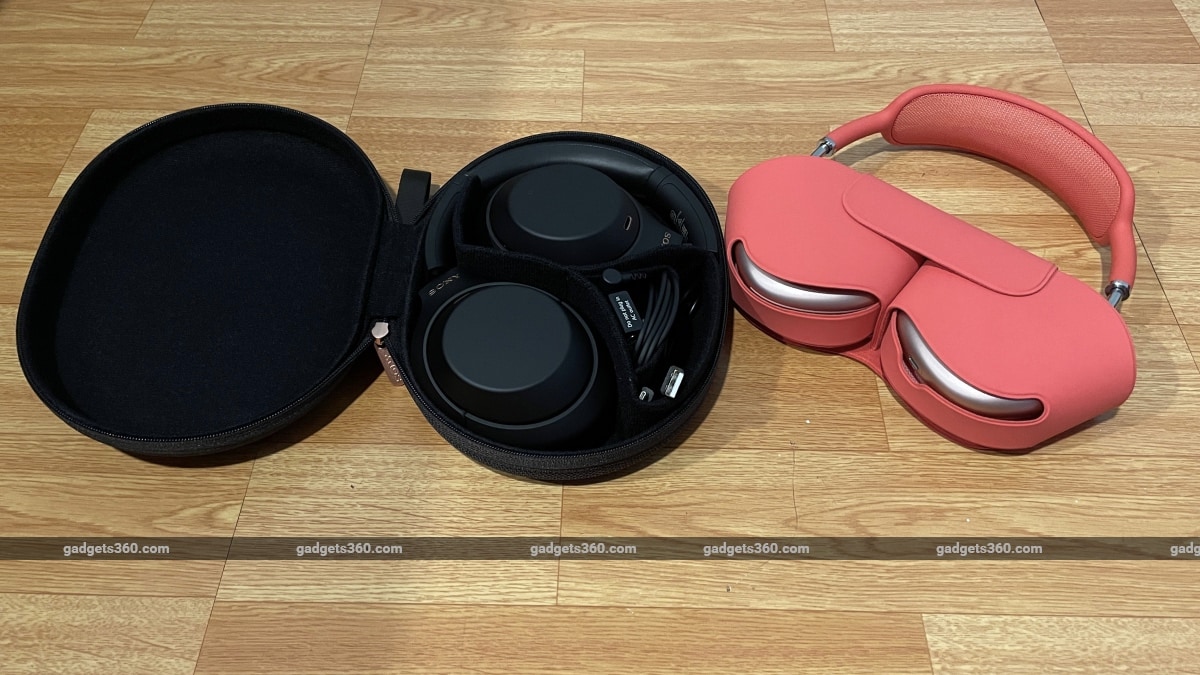 Part of this is because the Apple AirPods Max does not have a power button and never really powers down; it’s always on and ready to quickly connect to a source device. Naturally, Sony’s approach is objectively better, and is recommended for anyone looking for reliable and long-lasting battery times.

The Apple AirPods Max and Sony WH-1000XM4 are the best-sounding wireless headphones you can buy today, thanks to a combination of good hardware and software. Active noise cancellation is effective and class-leading on both of these headphones as well. However, Sony’s superior Bluetooth codec support does mean that when used with the right source device and with high-resolution audio, the WH-1000XM4 sounds noticeably better than the Apple AirPods Max.

That said, when using the AAC Bluetooth codec – as would be the case if you used the Sony WH-1000XM4 with an iPhone or iPad – there’s very little difference in sound quality between the two. Both pairs of headphones offer detailed sound, a flexible and energetic sonic signature, and the ability to bring the most out of your audio tracks.

What also stands out about the two headsets is that the sound isn’t meant to be analytical or neutral; it’s enjoyable, and meant for the everyday listener rather than the discerning audiophile. Sony does go a step further than Apple in offering a bit more detail without losing out on the ‘fun’ element, while the AirPods Max is a bit more flexible and capable of adjusting its sound to different genres.

Active noise cancellation on both pairs of headphones is very effective, but Sony’s range of customisation options gives it an edge here. I often found the starkness of the AirPods Max’s active noise cancellation to be unnerving, and I liked that I could adjust this on the Sony WH-1000XM4. Additionally, the Sony WH-1000XM4 will support the default voice assistant on your smartphone, while the AirPods Max expectedly only allows Siri to be used with Apple devices. 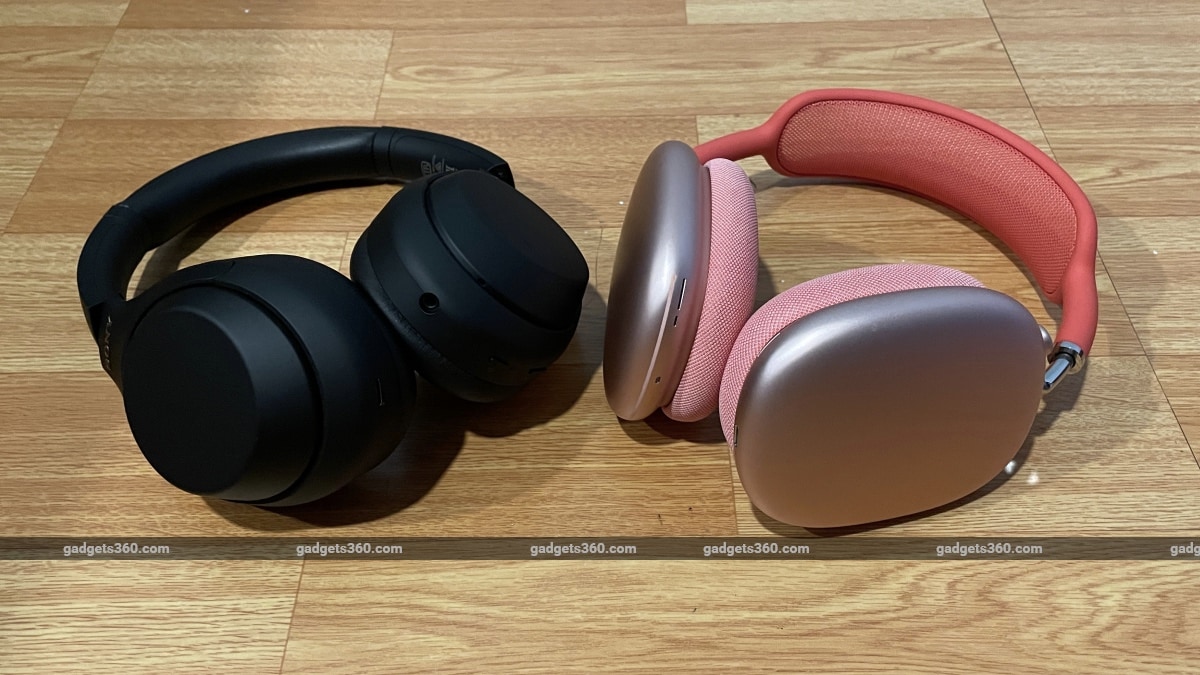 Despite the large difference in price between the Sony WH-1000XM4 and the Apple AirPods Max, these two pairs of headphones have both put up a strong fight for the crown. The price difference will actually help many people make their decisions – you either cannot wrap your head around what Apple is charging, and should pick the Sony WH-1000XM4 for that reason, or it doesn’t matter to you at all.

If you’re among the latter set and if you own one or more Apple devices that you intend to use as your primary source(s), the AirPods Max should definitely be your top pick. The seamless connectivity, ability to switch quickly between different Apple devices, good sound quality and active noise cancellation, and beautiful design makes this a premium listening experience in every way.

However, if you’re looking for what is objectively the better-sounding pair of headphones, that title goes to the Sony WH-1000XM4. Better codec support, more impressive features, and plenty of customisation options for both iOS and Android through the app make this the better value-for-money option. Excellent battery life is a pretty big factor as well.

Will iPhone 12 mini become the affordable iPhone we’ve been waiting for? We discussed this on Orbital, our weekly technology podcast, which you can subscribe to via Apple Podcasts, Google Podcasts, or RSS, download the episode, or just hit the play button below. 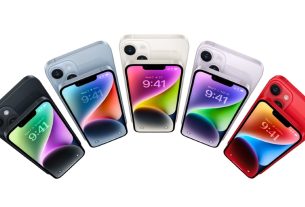