JPMorgan‘s wealth management unit is launching a major ad campaign as it tries to endear itself to younger investors.

It’s the first multi-channel ad campaign from the group since the company folded up certain wealth-management operations into a unit back in December 2019. That unit includes its branch- and office-based financial advisors, remote advice and its self-directed investing and automated investing offerings.

It also comes during a hot period for retail investing, with major online brokers including Charles Schwab, TD Ameritrade, E-Trade and Robinhood seeing activity surge. Charles Schwab added a record 3.2 million new clients in the first quarter of 2021, more new accounts than in all of 2020. JPMorgan declined to share the number of its self-directed investing or automated investing clients.

Dipti Kachru, chief marketing officer of the U.S. Wealth Management group, said JPMorgan has strong brand awareness and credibility, but that many younger investors see the brand as being out of reach for themselves.

“We know we’re dealing with a perception where we’re not accessible for younger investors. We want to change that,” she said. She said the campaign also seeks to reinforce what the wealth management unit is and drive growth.

Some of the messaging goes for an aspirational feel — some digital ads have messages like, “The life you envision is our life’s work.” Others describe offerings like its advisors, showing customers walking into a branch and speaking to one of them. The company, which worked with WPP agency Swift on the campaign, said it seeks to reach more than 30 million U.S. consumers with the campaign via TV, video, social, audio and digital display ads.

“It was important for us to not just say what we’re going to do, but show how we do it, and clearly demonstrate it,” Kachru said. “It is a fairly sort of cluttered and commoditized space … How do we bring 200 years of expertise and credibility in this space, our investment in technology and digital and make that work in service of the client in a more personal way? That’s sort of the thread that binds the work together.”

Kachru said the campaign attempts to catch the eye of both those who are completely new to investing and those who may be more mature investors who work with other companies but might be looking for more personalized advice.

“We know that there’s work to be done in making more customers aware of how we can serve them in the market, a lot of whom actually have a relationship with us at Chase today,” she said. Those customers might have a deposit account or credit account with Chase, but are investing with another company, she said. “There’s inherent benefits of expanding their relationship with us, specifically in bringing the investing part of the story seamlessly into the app that they’re engaging with every day.” 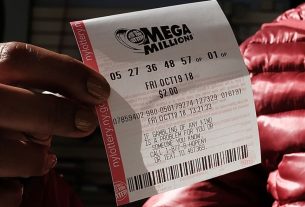 Lucky Mega Millions winning numbers: These 10 numbers get drawn the most