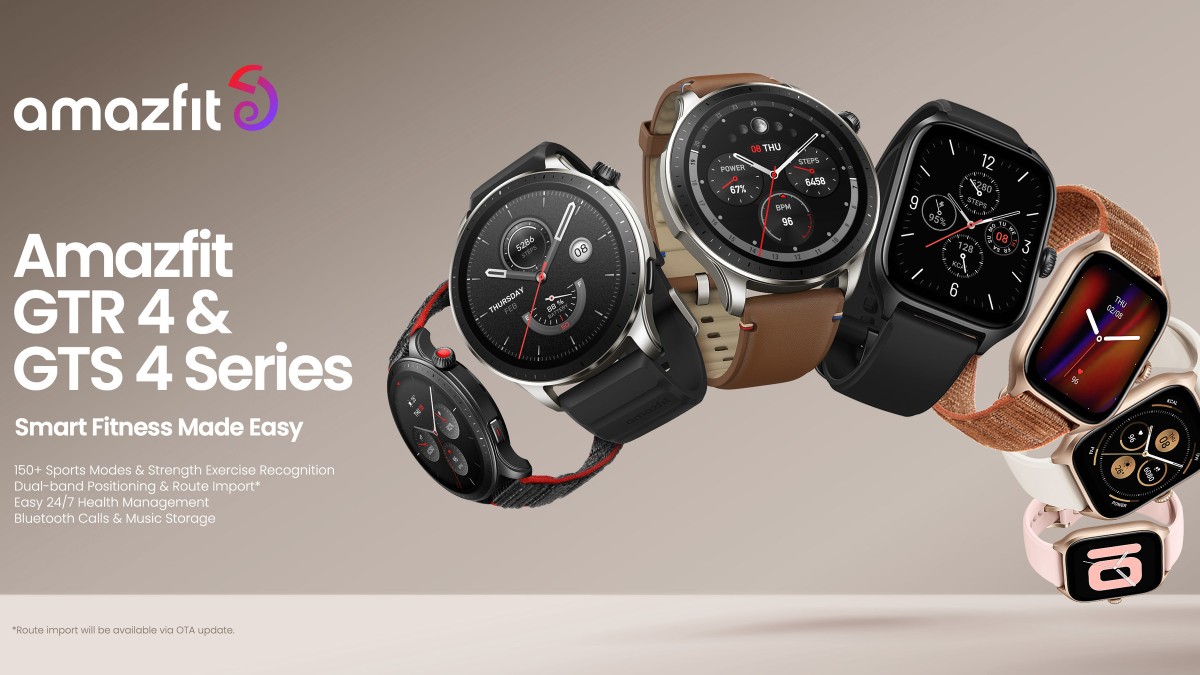 Amazfit GTR 4 and GTS 4 launched on Thursday with dual-band circularly-polarized GPS antenna technology that provides precise positioning. These smartwatches support five satellite positioning systems and can be used for real-time GPS tracking. They come with over 150 sports modes, including running, cycling, swimming, and more. Amazfit has also debuted its BioTracker 4.0 PPG biometric optical sensor, which can be used for 24/7 blood oxygen, heart rate, and stress monitoring. These smartwatches are equipped with batteries that are said to last over a week of regular use.

The Amazfit GTR 4 and Amazfit GTS 4 go on sale in the US from Friday. These Amazfit smartwatches are both priced at $199.99 (roughly Rs. 16,000). The Amazfit GTR 4 comes in Racetrack Grey, Superspeed Black, and Vintage Brown Leather colours. Meanwhile, the Amazfit GTS 4 offers Autumn Brown, Infinite Black, Misty White, and Rosebud Pink colour options.

The Amazfit GTR 4 sports a 1.43-inch HD (466×466 pixels) AMOLED display. It includes over 200 watch faces with matching always-on displays. The smartwatch has a metallic middle frame. It is 10mm slim and weighs about 34g.

On the other hand, the Amazfit GTS 4 has a 1.75-inch HD (390×450 pixels) AMOLED display with over 150 watches faces and always-on displays. This is a slimmer and lighter offering than the Amazfit GTR 4 with an aluminium alloy middle frame. It weighs only 27g and is 9.9mm thin.

These new Amazfit smartwatches feature dual-band circularly-polarized GPS antenna technology. It can be used for precise real-time GPS tracking. The company will soon offer a feature that will allow users to import route files and navigate them in real-time.

The Amazfit GTR 4 and Amazfit GTS 4 come with over 150 sports modes. These smartwatches are programmed to automatically recognise 15 strength training exercises and eight sports movements. They are equipped with the all-new BioTracker 4.0 PPG biometric optical sensor for 24/7 monitoring of blood oxygen, heart rate, and stress levels.

These smartwatches run on Zepp OS 2.0 that features two games, GoPro, and Home Connect third-party apps. They come with inbuilt Amazon Alexa and also feature an offline voice assistant. There is a inbuilt microphone and speaker for answering Bluetooth calls. Users can also store music on the smartwatches or use them to control music streaming on their smartphones.