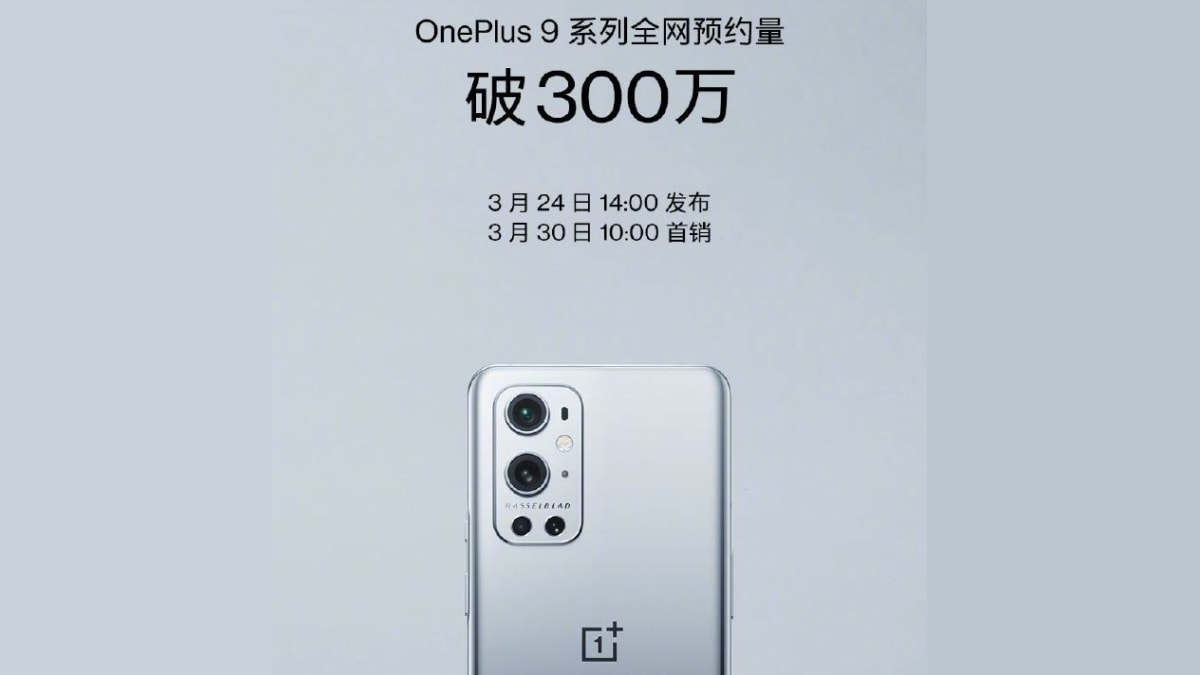 OnePlus 9 series of phones has already received more than three million reservations in China a few days before the launch, according to a poster released by the company. OnePlus is officially launching its latest smartphone series globally on March 23, while China will see its launch on March 24, and the first sale on March 30. To recall, the company had opened pre-bookings for the smartphones earlier this month in China. Alongside the OnePlus 9 and OnePlus 9 Pro, the company has also announced that it will be launching the OnePlus 9R and a smartwatch on the day of the global unveil.

With a post on its Weibo page, OnePlus has shared that it has received over three million reservations for the OnePlus 9 series of smartphones before its launch this week. Of course, reservations don’t equate directly to sales, but the figure those indicate how popular the phones are even before their launch. Reservations in China began on March 9, while the phones will be available to buy via JD.com, Suning.com, and Huantai Mail.

As we mentioned, OnePlus is launching its latest smartphone series globally on March 23 with three phones – OnePlus 9, OnePlus 9 Pro, and OnePlus 9R. The smartphone series is also the first by the company to receive cameras developed in collaboration with Hasselblad.

OnePlus 9 series features anticipated include a 120Hz refresh rate LTPO display on the OnePlus 9 Pro that can reduce all the way down to 1Hz to optimise battery efficiency. The OnePlus 9 and OnePlus 9 Pro are confirmed to be powered by a Snapdragon 888 SoC, and are expected to be paired with up to 12GB of RAM and 256GB of inbuilt storage. OnePlus may also add 50W wireless charging capability for the 4,500mAh battery on its latest range of smartphones.

In other OnePlus-related news, the company is also launching the OnePlus Watch along with the OnePlus 9 series of smartphones. The smartwatch is rumoured to have IP68-certified water resistance and may also feature Warp Charge fast charging capabilities. The watch is also anticipated have a 46mm dial; be available in black and silver finishes; feature heart rate and Sp02 sensors, apart from Bluetooth and GPS connectivity.

Is OnePlus 8T the best ‘value flagship’ of 2020? We discussed this on Orbital, our weekly technology podcast, which you can subscribe to via Apple Podcasts, Google Podcasts, or RSS, download the episode, or just hit the play button below.